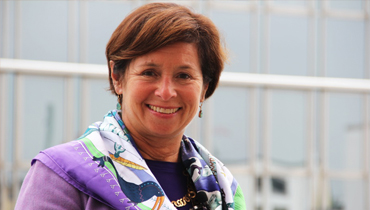 My classes focus on cultural diplomacy, and intercultural communication is an important topic within each course. SOLIYA takes the conversation from the theoretical to the real.

SOLIYA's Connect Program has been an integral component of Diplomacy and Culture classes (CULP 22) at Georgetown for seven years, putting into practice Professor Cynthia Schneider's lectures and readings about the importance of people-to-people communication. SOLIYA is a virtual exchange program that places eight students from around the world in a virtual "room" for a facilitated conversation about their respective lives, politics, religion and culture. Conversations can range from discussions about plans for the weekend to debating whether or not Osama Bin Laden orchestrated the 9/11 attacks. Thus, Georgetown students are led to question and re-evaluate their prior cultural assumptions, and hopefully learn to practice empathy and critical thinking in a cross-cultural interaction.

SOLIYA presents a rare example of online learning as more than a tool for presenting information, but instead as an experience, with its own integral learning process, that collapses geographical boundaries to enable students to build their own bridges to peers in other regions. The goal of the project was to help students understand the human impact of foreign policy, with an emphasis on culture. In Spring 2014, the 21 students in Schneider's Diplomacy and Culture class used SOLIYA for a period of 2-3 hours per week of real-time online exchange with seven other members of a group. Students drew upon and shared their experiences in class and also used SOLIYA as an opportunity to put class theory into practice in a global interaction.

Assessment findings suggest that students found that SOLIYA complemented the formal learning in the class and that they came away with a deeper, more nuanced understanding of both current events in Muslim majority communities, and how others view the United States. Student feedback also indicated that the SOLIYA experience depended greatly on the dynamics of their group. Some SOLIYA groups included participants who contributed to the discussion, and others had participants who did not talk. Those who were in groups that held lively, profound discussions found SOLIYA to be an enriching experience. Overall, despite the variety of responses to the experience, SOLIYA pushed students to consider the themes discussed in their Diplomacy and Culture class in an international setting.