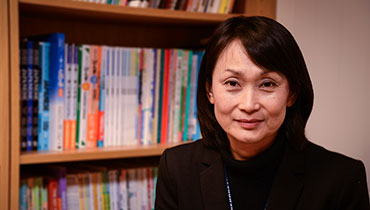 After watching a series of introduction videos and working on radical awareness activities, students paid more attention to the structure of an individual kanji character and word components than before. Classroom observations indicated that students found kanji learning more enjoyable and interesting as the semester progressed. Designing exercises helped me become aware of the types of kanji learning strategies students needed to learn at this phase of Japanese learning, and I felt that I was able to teach kanji learning strategies in a more systematic way.

Kanji words constitute a critical part of Japanese written vocabulary, and the acquisition of a good working knowledge of kanji is essential in learning to read in Japanese. Yet many students of Japanese, especially those from an alphabetic orthographic background, find kanji to be one of the most challenging parts of Japanese learning. Led by Principal Investigator Yoshiko Mori, this project aims to increase Japanese language students’ awareness of the compositional structures of kanji words; to have students learn new kanji words in meaningful context; to familiarize students with various effective kanji learning strategies; and to enhance students’ motivation and interest in kanji. This project supports the design of online kanji learning lessons to be implemented in core Japanese language instruction from introductory through advanced levels during the 2014-15 academic year. It also examines the impact of online, self-directed kanji learning tools on the development of Japanese language students’ written vocabulary knowledge, and the pedagogical benefits of implementing fun, educational self-learning tools in kanji instruction.

In Fall 2014, the students in First and Second Level Japanese courses learned ten sets of new kanji characters, with one lesson per week. Half of the sets were taught using online kanji exercises, and the other half were taught with conventional paper-and-pencil tasks. The two types of exercises alternated every week. After each lesson, students were tested on the characters and words introduced in the lesson. Mori and the project team are currently analyzing students’ performances on kanji tests and their responses to the end-of-course questionnaire. Preliminary analyses suggest that students improved their ability to infer the meanings of unknown kanji characters using information from character components and surrounding context.

Teaching the compositional structures of kanji characters, kanji elements (often referred to as radicals), and the importance of using surrounding context becomes an important part of kanji instruction as student advance their Japanese studies. Mori and this project team intend to continue to take advantage of technology and online resources in order to enhance student learning and motivation beyond the introductory and intermediate levels of Japanese.